Figures that Hasbro will NEVER make 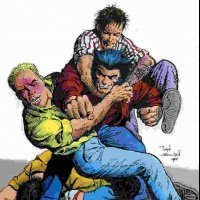 By TooMuchKarate
August 6, 2019 at 06:05 AM in Marvel Legends Figure Discussion