By DarthOdette
August 6, 2019 at 09:19 PM in Marvel Legends Figure Discussion 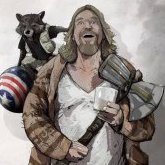