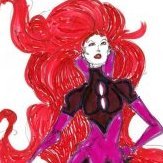 We all knew they were gonna do the Stealth Armor, but Hologram armor is a surprise. Very happy we're getting Ironheart. I hope it's her more recent Champions look.

@ADour I don't think Darkstar is 100% right for this wave either. She should be part of a Black Widows wave. However, then I remember that she is a recurring character in the latest Avengers series as