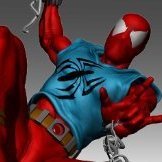 Why Include an unneeded alternate wolverine head but not one for siryn. If you’re going to not give her an alternate head at least make the one she comes with a screaming one. So disappointing.